We do a preschool co-op with Keira (I did one with both Ava and Norah). Here's a picture from today. Why haven't I thought of taking pictures of the kids when they are at my house? I think I'll do that the next time I host. 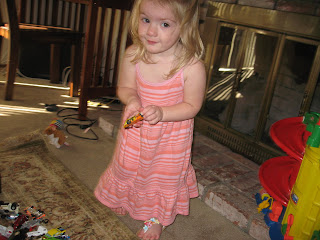 Talk and other updates

Last Sunday Ava gave her second talk in Primary. She gave her first one back in March, but she was so shy that Mason read it for her. But she has come a long way! Mason still went up with her, but she read the whole thing herself, including the scripture. Way to go Ava!

Serena is now starting to roll over. She'll flip from her back onto her tummy, and that's it. Half the time she gets her arms pinned under her belly, which causes her to cry until we pull them out. Silly little baby!

Norah is enjoying preschool. She now wants to walk from the car to the door of her preschool all by herself - because as she puts it, "I'm a big girl now!"

Keira is still a force of energy. Enough said.
Posted by ashes at 4:38 PM No comments:

Serena is now five months, but here are her four month stats:

She is quite the belcher. By far a champion when compared to our other girls. Her burps are loud and looooong! And usually followed up by tons of spit-up. Not quite as much spit-up as Norah had, but still waaaaaay more than either Keira or Ava.

Serena is also very mellow. She babbles and coos on her playmat, even when all her other sisters come to fawn all over her. And she loves to giggle and smile on the changing table.

But by far the one thing that has helped me out with juggling four kids is the fact that Serena is an AWESOME sleeper. She has one nap in the afternoon for about 4 or 5 hours, and then she sleeps for 12 - 13 hours at night - without interruption! Score! That allows me the much needed rest to be a mom everyday. 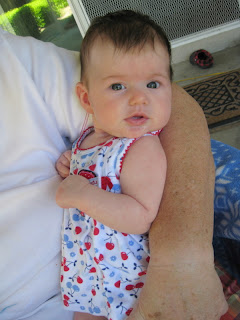