Our oldest two, Ava and Norah, love playing together. Which is great, because it's fun to see their relationship flourish and grow. My only hope is that they continue to be close as they get older, and that Keira will become a part of their circle as well (which I think she will - they already love to play with her too).
They have such vivid imaginations. From pretending to go on campouts and picnics, to pretending to be dragons and princesses, Ava and Norah always have a great time together. Well, except when they are in bad moods, LOL! 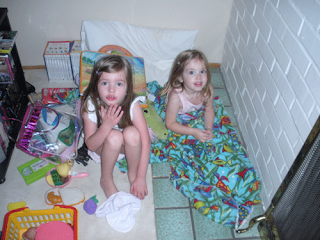 Wearing hats when it's still summer

Inspired by a friend's blog, I've decided to try and update the progress and growth of our girls.
Operative word being "try."

Keira is now in what I like to call "prime baby mode." She rolls, she coos, she smiles, she giggles, she grabs our fingers. All the cute things babies can do, she does. She is even attempting to try and crawl. She'll roll onto her tummy, and push her little legs up behind her to try and push herself forward. It's quite amusing to watch, but utterly frustrating for Keira, since she starts to cry after three or four attempts.

Keira in sunglasses. We do things like this because we can, LOL! 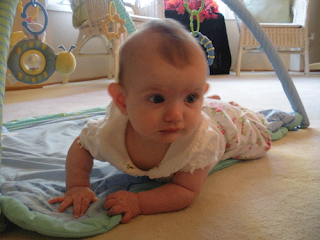 I Couldn't Help Myself

This week I gave in - I decorated for Halloween! I just love, love, love this time of year. I've been chomping at the bit ever since we moved into our new place to start holiday decorating. I really tried to wait until October, but I couldn't resist. When the stores start putting out the candy and the costumes, I just want to join in the fun!

Ava and Norah were pretty excited about our decorated house too. I did most of it while they were napping, so they had a fun surprise when they woke up. They went from room to room, oohing and aahing at the pumpkins, the bats, the haunted houses, and the lights. Yes, I even have a black Halloween tree with orange lights. I think now I'll go take some pictures to share!

Okay, I've got the pics!

Now the hallway to the left as you enter the house: 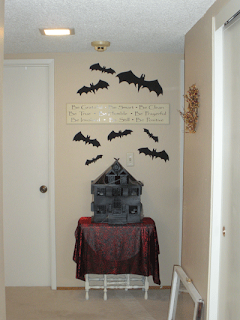 Here's some shots of the living room: 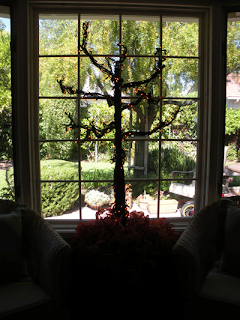 And the dining room: 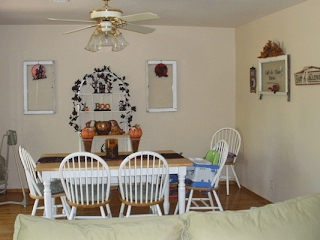 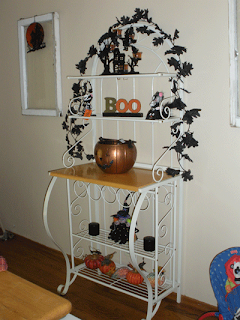 Our bathrooms are also decorated. I do plan on putting lights outside in the front and the back - and perhaps something hanging from our trees. Oh the possibilities!!

Animals at the Farm

Today for playgroup we went to a local farm. Ava and Norah were really excited the whole car ride up (it was about 35 minutes away). Once there, we saw some cows, horses, sheep, and bunnies. There were even some peacocks wandering about, although they didn't spread their tails.

The farm has an event every week called "Toddler Tuesday" where they show the kids how to shuck and crack corn, and then they feed it to the goats. I admit, I never knew what cracking corn entailed until this morning, LOL! You put the hard kernels into a funnel attached to a crank, and it grounds up the kernels.

Norah was a bit scared to feed the goats, but Ava gave it a go. I had some corn as well, and I showed her how to just put her open hand up to the goats, and they gobble it up! (Their lips kind of tickled). I think it startled Ava a bit, because once the goats took a bite of her corn, she immediately dropped it on the ground! But she said she enjoyed that, and then promptly asked if we were going home, LOL! During this whole procedure Norah was whining. I guess I don't have country kids.
Posted by ashes at 5:12 PM 1 comment:

Over Labor Day weekend my brother and his daughter Isabelle came for a visit. Ava was so excited to see her. They were fast friends, with Ava calling Isabelle her best friend by the time they left. It was so cute to see them play together.

We had loads of fun with them - our big adventure was touring the Jelly Belly Factory in Fairfield. We saw all the different machines that it takes to make those tiny treats. Everyone who takes the tour has to wear one of those old-fashion wedge hats - I was amazed that my parents kept theirs on, LOL!

After the tour we went into the sweet shop to load up on our favorite Jelly Bellies. I love the watermelon flavor - right now Ava and Norah just love any of them. There was a tasting bar which featured new flavors, old favorites, and the reject pile. The reject pile includes vomit, booger, and dog food flavored beans. My brother actually tried one of those! I didn't have the courage to try one - just looking at them was somewhat revolting. I tried the chocolate mint ice cream flavor. It was good, but I'd rather have the ice cream.

Since Mason's birthday fell on Labor Day this year, we had a fun date night out sans kids. My parents kindly had our crew plus Isabelle for the night. It's amazing how peaceful dinner can be without the background noise!
Posted by ashes at 4:41 PM 1 comment: